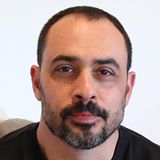 Brett has worked as a qualified dietitian, a personal fitness trainer, a life coach, and a trainer of life coaches. For the past 12 years he has managed a team of business coaches in a niche industry, and facilitated workshops on leadership, team dynamics and communication across Australia, New Zealand, UK, Singapore and the United States.
He is a passionate champion of men’s well-being and masculine development, and his participation in the Men’s Group he founded in 2005 has been fundamental to his growth as a man, a husband and a father of four children.

Brett has also participated in personal development programs and workshops across the world, including a week with David Deida in Massachusetts, The Mankind Project’s New Warrior Training Adventure, the 5-day Shift Men’s Initiation in San Francisco, Trevor Grey’s 12-week Trusting the Masculine, several 10-day Vipassana silent retreats and the Landmark Education Curriculum for Living and Leadership Program. In 1999, Brett was also awarded the honour of the Bravery Medal by the Australian Governor General.

In 2011 Brett co-created www.mensgroup.info with Mike Britton and Dan Frybort. His mission is to support men across the world to create and sustain effective Men’s Groups.

Mike has spent the majority of his professional life working within the health and fitness Industry. With a combined degree in human movement and business Mike has focused on both the training and business aspect of his profession.
In 2000 Mike launched evolution which now operates in locations across Australia. His primary role in the business today is trainer and client mentoring, and cultural and strategic development.

Mike has participated extensively in personal development programs since 1994. His trajectory has included the study of various martial arts, judeo-christian religion, vipassana and other meditation techniques, Landmark educations leadership programs, and various mainstream (and not so mainstream workshops).
Mike is the father of two sons, Leroy and Rohan, and a daughter Mackenzie. As a single Dad, going through the process of divorce and separated families, recreating family, and raising sons in a joint custody environment Mike has learned at the coalface what it means to be a man and a father.

This experience coupled with a men’s group that he has attended fortnightly for the past 8 years helped to propel him to co-create www.mensgroup.info as way of providing men access to creating their own men’s groups. This free resource is one of the way’s Mike is giving back to his community.

Mike’s mission as it pertains to his community is to ‘create a life for himself that works’ and actively support, mentor guide and teach others to do the same. It can be summarised in the engraving on the ring that he wears “I am God’s son complete, healed, whole, shining in the reflection of his love”.